Christopher played his local venue; Quorn Village Hall, for the first time at the Quorn Beer Festival on 16th October. Christopher opened the live music on the night which included sets by Chris Conway, Jake Manning and Becca O'hara and Initial Thought.

"It's been a great year so far. I've played more shows this year than previously and I've really enjoyed playing live with The Underground Kings. It's nice to do the odd solo gig now and again though and coming home to play Quorn Village hall has been fun. It was nice to see Chris Conway and Jake Manning again too. Last time I saw Jake, I was still trying to get the band (Underground Kings) together, which was back in February. We are now taking a break from live shows to do some writing and recording and we hope to have someting to release this side of Christmas" Christopher 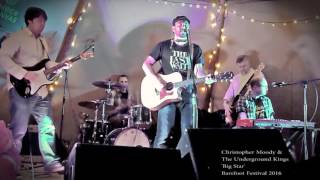